I visited 5 cities over the course of 10 days in Morocco. A quick Google search can give you infinite more detail about every city and lists of “Things to Do”, but here I will tell you what I experienced in the briefest way possible. Think of it as highlights, complete with where I went, what I did, what I wish I had done, and how each city made me feel. Perhaps something I write here will pique your interest, launch you into frantic research, or maybe give you a bit of a heads-up on what you could expect.

My experiences in these cities were, well, mine. I was on a rushed whirlwind of adventure to soak in art, history, culture, and new experiences at an uncanny and exhausting rate. Your adventure could be completely different, so don’t interpret my brief summaries as declarative statements on what any of these cities are like. Keep your expectations wide open, for you may stumble upon some things I wasn’t lucky enough to have found.

Rabat is the capital of the country. My first days there I thought it to be very relaxed and culturally rich, with lists of things to do including the Museum of Modern and Contemporary Art, the Kasbah of the Udayas, Hassan Tower, the Mausoleum of Mohammed V, and plenty of places to eat. When I returned to the city near the end of our trip, though, it honestly felt a bit dangerous. Maybe it’s just because I was in a different part of town, maybe it’s because our riad was uncomfortable, or maybe the exhaustion boosted my paranoia, but I felt uneasy.

On the plus side, though, there was still a beautiful coast to gaze at. Coming from Virginia, where our closest coast is a steely bluish brownish gray, I had never seen aqua blue water before. Though I had to view it from a distance, it was a memorable part of the city for me.

The old city walls are also a very prominent part of Rabat, often the backdrop of busy streets and crowds. The remaining chunks of fortress walls are a fascinating compliment, absurdly placed echoes of the past spaced throughout city. In fact, that sort of vibe was everywhere in Rabat; everything in the city seemed to be a lovely, unexpected combination of old and new. Young couples canoodling around a 900-year-old fortress. A modern art museum down the street from an unfinished 12th century mosque. Rabat was honestly just cool.

The vibe in Fes was intense. Everything was bold, bright, and busy, but also beautiful. It felt like there was never a place to rest your eyes, never an object without some sort of history to it. As an artist, Fes was my favorite place. As an adventurer, Fes was still my favorite place, even with the moments of apparent danger. After I came home, though, is when I discovered just how many things there were to do in Fes. I most wish I had gone to the Nejjarine Museum of Wooden Arts & Crafts and Dar Batha, a palace turned craft museum. Fes also had a gorgeous riad, and though I’m sure there are lovely riads all over the country, the one in Fes made every other hotel we stayed at feel lackluster. There also seemed to be an array of very cool random places hidden away in Fes, like (what I assume was) The Mosque of the Shirlain, a 13th century mosque crammed inside the souq of the medina. In fact, most of my favorite memories of Morocco came from the Fez medina because even though it was terribly overwhelming, it was also the most exciting. You can read more about the souq in the Fez medina in the Shopping post.

(A sign pointing to the Bab Bou Jeloud (the Blue Gate), the entrance to the souq in Fes el Bali)

I put these two together because they’re geographically very close. In fact, I visited them in the same day. Both of these cities are considered to be in the Fes-Meknes region and are about an hour away from the center of Fes.

Sefrou is known for its hundred-year-old cherry festival, an event I was unfortunately a month too early for. There were, however, cherries printed on the street poles! I may hate the taste of cherries, but I can still appreciate their presence. Though Sefrou had a wonderful handicraft center, I wish I had seen more of the city, including the small waterfall I learned was nearby.

Meknes also had an artisanal center as well as The Handicraft Room, which were both very exciting. There was also Lahdim Square, which I only saw from a window, but it looked like a very interesting place to explore. I later learned there was a crafts & textiles museum nearby, the Dar Jamai Museum, which I think I would have loved. 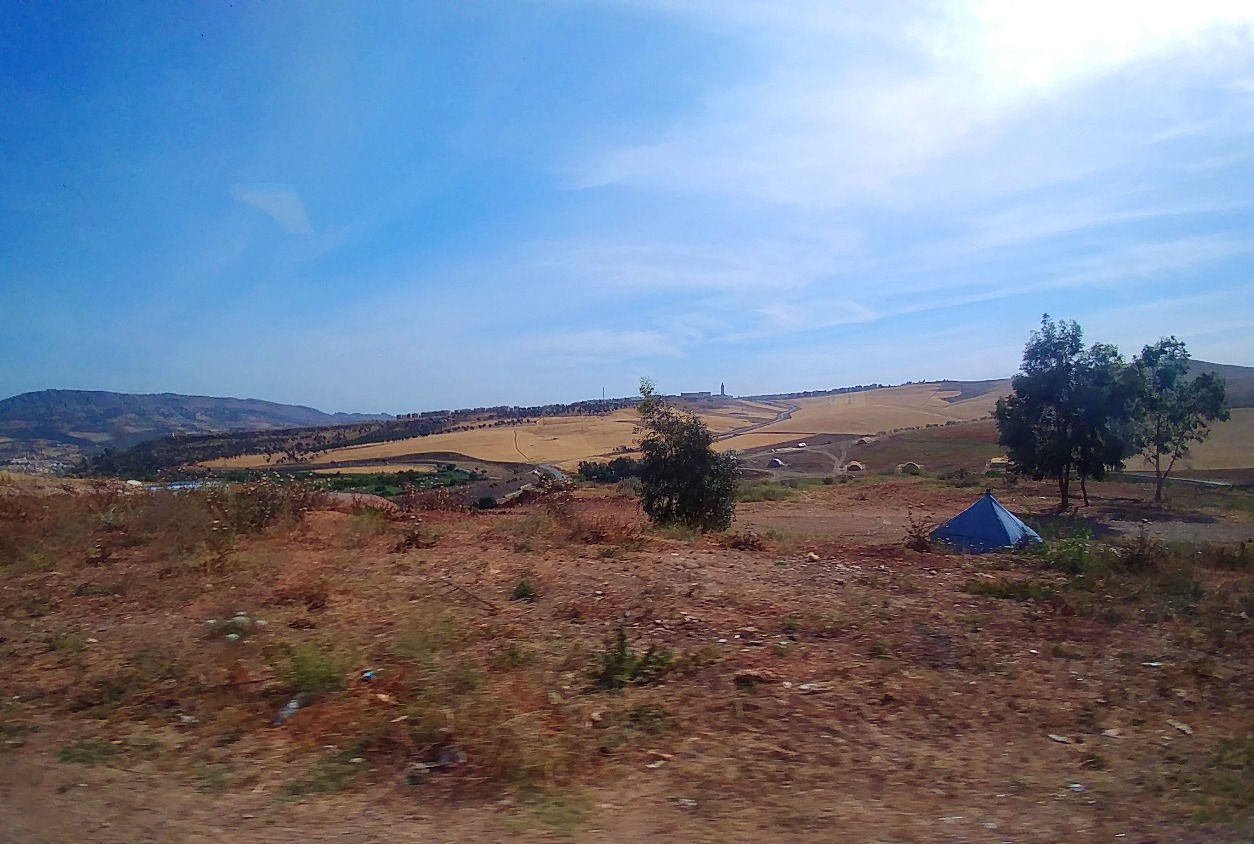 Marrakesh was by far my least favorite, despite it’s very nice fountain. It had the Majorelle Garden, which was nice, and the mystery souq that I absolutely loved, but otherwise it felt painfully touristy. There was also Jemaa el-Fnaa, a souq that I’m still not certain I even visited, but based on the internet it seems like a worthwhile place to experience. I also was in the Medina of Marrakesh, which held the Ben Youssef Madrasa, a stunning Islamic college converted into a museum.

A highlight, however, was the Berber Museum, nestled within the Majorelle Garden. Even though I couldn’t figure out how to get through the automatic glass door (yes, seriously), I loved that little museum. I could have spent all day in there looping back and forth, looking at what was on display. I also would have liked to have visited Dar Si Said, an artisanal museum, and the Marrakesh Museum . . . if I didn’t already see it.

Honestly, though, I feel like I had very minimal exposure to all Marrakesh had to offer. I think I just had the bad luck of being stuck in the tourist trap and, evidently, lost in the city.

If I had to narrow it down to just one quality about all these cities that I loved the most, it would have to simply be how old they were. Granted, I’m a hardcore history nerd, but I feel like being in a place that outdates you by at least a thousand years is a cool experience for anyone.

I know America is full of old stuff too; we’ve got a rich and interesting history all our own. However, much of America’s “old stuff” (the stuff contemporary with Morocco's old stuff) has been obliterated or covered up—and though every civilization has always been selective when choosing which pieces of history to preserve—America has an awkward habit of rewriting history, refusing to revisit it, and preserving our less than flattering moments in a glorifying way. I don’t mind America’s tumultuous past, but if you’re going to tell the story, tell the whole thing; that’s the only way to move forward.

Of course, Morocco has had its own rough moments in history, and I’m sure it’s effected which pieces of history get to be preserved, but for someone who has grown up in America (and in Virginia where there are 300 years of nonstop historical highlights are around every corner), it was a unique experience being in a place that—for the first time—didn’t preserve history that made me feel oppressed.

Okay, perhaps not the lightest note to end on, but how I felt is just as important as what I saw, and you deserve to know both.